From a socialist at work

A scene of shop-floor solidarity

Michael Friedman tells a story of co-workers instinctively standing up for one another in a contribution to the Socialists at Work series at SW. The series began with articles from the International Socialist Organization’s (ISO) Socialist at Work Toolkit, assembled by the ISO’s Labor Working Group, and we asked readers to send their own stories and ideas about being a socialist at work. Please consider contributing about your experiences and the lessons you’ve drawn from them in an e-mail to SW — or just tell us what you liked, or didn’t, about this series.

IN THE late 1970s and early 1980s, I was in the Young Socialist Alliance and participated in the parent organization’s ill-conceived “turn to industry.” Nevertheless, I learned lessons from that experience that were formative for me. One was the concrete meaning of class solidarity.

In 1980, I was working in an NYC Transit Authority bus depot, while active in the Central America solidarity movement.

One time, I was leafleting on the shop floor, among the mechanics and other co-workers, around something related to Washington’s ongoing interventions in that region. Most of my co-workers took and looked over the leaflets, and engaged with me on the issue, but few agreed with my politics. 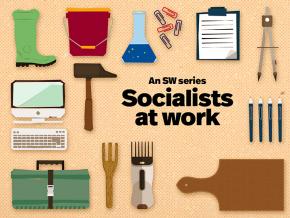 I was young, brash and caught up in my leafleting, so I didn’t notice the supervisor come up behind me. Livid, he demanded I accompany him to his office. There, he chewed me out for several minutes and then threatened to write me up.

The supervisor took me back out to the shop floor in search of witnesses and evidence of wrongdoing. He went up to one of the mechanics. My leaflet was sitting on top of his bench.

The boss pointed at me, and said, “Did he give you that?”

An SW series dedicated to discussing how to organize in your workplace. The ISO’s Labor Working Group has contributed how-to guides, and readers are adding their own experiences.

And so it went. The supervisor successively asked any number of workers if I had given them a flier, and they all denied it, protecting a co-worker, even though they weren’t anti-imperialist, or even anti-Ronald Reagan.

Some years later, I reflected on the context to that event, and remembered that, at around that time, former UAW president Douglas Fraser’s admonition about “one-sided class warfare” had taken stark form in Reagan’s attack on PATCO, which much of the labor movement (and especially transit workers) saw as an attack on all of us.

Finding another socialist at work

Socialists and the rank-and-file strategy